Rigsby Back With US Team But Won’t Play Pro … Yet

Alex Rigsby is back on the ice with the US National Team program this week at the 2015 USA Hockey Women’s National Festival in Lake Placid, New York. She will not play organized hockey this winter, however.

The 23-year-old graduated after a record-setting college career at the University of Wisconsin in 2014 and for a second straight season will stay in Madison to train rather than joining a team in the new National Women’s Hockey League (NWHL) or pursuing an opportunity in the existing Canadian Women’s Hockey League (CWHL).

“Personally, I won’t be participating in either league this year,” Rigsby told InGoal Magazine. “I am going to stay in Madison and train. I think that’s the best situation for me, individually.”

It’s a choice that has worked out once for Rigsby already.

After finishing an outstanding NCAA career as the University of Wisconsin’s female Athlete of the Year, Rigsby, who was a surprise omission from the 2014 US Olympic team, spent last season training and earned a spot on the 2015 World Championship team that won a gold medal in Sweden.

Rigsby replaced fellow UW alum and two-time Olympic silver medalist Jessie Vetter, who has also kept her spot on the US national team since graduating in 2009 without playing elsewhere, in the second period of the gold medal game against Canada. Vetter was credited with the win, but Rigsby stopped 13 of 14 to wrap up the 7-5 victory.

Rigsby is no stranger to championships, winning a Frozen Four national championship during her freshman season at Wisconsin. She lost the title game the following season but finished her college career with a record 100 wins, tied for second most in NCAA history, and was an All-American while also serving as the Badgers captain during her senior season. Rigsby, who was also a finalist for the 2012 Patty Kazmaier Memorial Award as the top NCAA player, is the first goalie to play for the US under-18, under-22 and senior national teams and became the first female drafted into the USHL when the Chicago Steel picked her in 2009.

Rigsby, who played on AAA boys teams through bantam and midget and won gold at the women’s under-18 world championships, finished her college career with Wisconsin records for wins (100) and saves (2,530), and was third all time with a .940 career save percentage. She is also 11-1-0-2 with a .931 save percentage over 16 games at various age levels with the US National Team program.

Rigsby was at home coaching at GGSU Legends Camp in Chicago. (photo by Cheryl Adams/InGoal Magazine)

InGoal Magazine caught up with Rigsby while she worked as a coach Sparks at the GGSU Legends Camp in Chicago this summer (alongside Stanley Cup champion Scott Darling and Toronto Maple Leafs prospect Garrett Sparks) and talked to her about the evolution of her game and the current state of women’s game overall:

IM: Do you have any interest in playing in either of the pro women’s hockey leagues that have started in North America? What are your thoughts on these two leagues in general?

Alex: “I think it’s a great thing for them to create a new league, and to offer it to the players. It’s just going to continue to grow the sport, that’s exactly what we need for women’s hockey. Just gives that many more teams for people to go out and watch. Personally, I won’t be participating in either league this year. I am going to stay in Madison and train. I think that’s the best situation for me, individually. So I’ll be doing that. I think I might be playing some games with the (Minnesota) Whitecaps, who might join one of the leagues next year.”

IM: Do you think the women’s leagues can get better noticed by the fans now with the expansion of another league, etc?

Alex: “It’s great. So many people come up to me, ‘Hey, are you playing in that women’s league? We heard there’s a new women’s league.’ Just even for that to get that much talk out of it, I know Dani Rylan with the NWHL has done a great job promoting it and being on social media. She’s marketed it very well, people know about it. Even when we were in Europe for Worlds, we had some of the Europeans saying, ‘Hey, we heard about the women’s league. How is that gonna be?’ It’s all brand new, so it’s exciting, and I think it’ll definitely help fans get to the games.”

IM: Female hockey fans feel that they need to work harder to get respected as sports fans. Do you feel like that is changing any? Do you think that having women playing the sport professionally (versus just used as on-ice entertainment/ice girls etc) will help with that? How do you think that professional hockey teams – at any level – can help women feel more welcome and involved as fans?

Alex: “We were really lucky at Wisconsin. The last two years we had our own individual women’s hockey rink. It was an unbelievable facility, and we would pack it. And I think for us to be able to pack it, I think it was 2,400 people, to fill that arena, really was an eye-opener. We have this many people interested in watching women’s hockey, and it has a lot of potential. It’s a family-fun environment, and people really enjoy watching us play. It’s almost a different type of game, obviously, just since there is no hitting. I heard comments for a while, people watching us just because (as players) you have to be really skilled, you have to develop plays.”

IM: A couple women have earned goalie positions in the European leagues, but forwards like Hayley Wickenheiser have previously played in pro European leagues. Do you think that goalies are the most likely position where women will enter the AHL/NHL? Or do you see it being something else?

Alex: “Even growing up, for me personally, I played against Megan Bozek, Amanda Kessel, I’ve played with Brianna Decker, and it all got to a point where they eventually had to go to the girls’ side. A lot of it was after going into freshman year of high school, they all went to the girls’ side. I’m not exactly sure when Bozek left the girls, but for me, I was able to go all the way up to college playing boys vs. boys hockey. I definitely think (goalie) is less demanding physically, and you can get by that way.”

IM: How did you first end up playing goalie, and what drew you to the position? When did you know it was something you could do at a high or professional level?

Alex: “For me, I also started when I was five. Rotation when I was six years old, so they always rotated a new goalie who’d go for a whole week. They’d get the equipment and take it home. And I thought it was the coolest thing ever.

“From there on, I’d beg my parents to let me play. My mom, she tells me now that she sat down with one of my coaches who played at Wisconsin. He goes, ‘You know, if she’s going to succeed at any position playing men’s hockey, or boy’s hockey, it’s going to be through goal. That’s going to be the most opportunity.’ So my parents were like, okay. So they let me keep playing, and that was around the time when the US had just won Olympic gold in 1998.

“People were always like, ‘Oh, you should try to play in the Olympics some day, they have a women’s hockey team,’ so growing up I was always trying … I didn’t know the meaning of it. And then as I got older, I started to understand what it really meant to be able to someday, hopefully, represent the US with playing hockey.”

IM: Who did you look up to as a goalie when you were a young player?

Alex: “For me, growing up, I looked up to Manon Rhéaume. It was after, obviously, she played in the game with Tampa Bay. She ended up being one of my coaches for a part-time girls’ team when I was eleven. So I thought that was the coolest thing. I wanted to be like her growing up, cut though the boundaries of what women were doing. It was fun, too, because we just had a USA goalie camp, and she was at the camp. So, it was exciting to interact with her. I hadn’t seen her in ten years.”

IM: What is your biggest strength as a goalie? What is one area you are trying to work on right now/this summer to improve? How are you going about it?

Alex: “I’ll say for me, my biggest weakness is my patience. I have a hard time being patient. Just standing up on the plays, not poking all the time. Strengths – I think my competitive level, my competitiveness is what’s gotten me to the next level. Compete on every shot; battling. I think that has driven me throughout the years.”

IM: How has your coaching progressed over the years — is there still have one person you work with primarily in offseason; what help do you get in-season from your team?

Alex: “I think that when you get to a certain level, it’s going to be if you can critique yourself and know why you let in a goal, even in practice you let in one goal, you know exactly what you did wrong and how you can improve it, that’s what’s going to take you to the next level. Just having that self-awareness. For me, I worked with a guy growing up who’s actually in Chicago but just moved recently to Colorado, his name is Kelly Gee. He’s unbelievable as a coach. The things he came up with to improve my bad habits is – I have no idea how he did it. Now I work with Larry Clemens, who’s in Madison, and I skate with Jessica Vetter a lot. We train together; we basically skated together the entire year, which is great because we learn from each other and share a goalie coach.”

IM: You’re out on the ice here at GGSU Legends Camp helping teach and mentor kids and adults; What do you think you bring to the table in that position as role model/mentor/coach?

Alex: “I think it’s understanding. You’ve been through that, you’re telling someone that you need to keep your hands out. Well, I’ve been working on that all year, and it’s something that we are so self-aware of what we do, and I think that’s what you can bring to the table, your own experiences. There’s been plenty of bad habits that I’ve had to break over the years, as any goalie would. So for you to learn and then give advice to these people on how they can improve it, tricks that worked for you get through it. Just bringing your own experience helps a lot.” 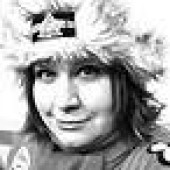