Sure, there is one-on-time with goalie coaches and valuable information is passed along, but the summer orientations often turn into chaotic shooting galleries. It can be a hectic and flustering experience, especially for those that start keeping a mental count of just how many pucks have gone in the net.

But that didn’t fluster Jake Oettinger during the Dallas Stars development camp, which wrapped up on Tuesday here in Texas. In fact, very few things bother the big goalie Dallas selected with the No. 26 overall pick in the 2017 NHL Entry Draft.

“It’s very, very rare (in a teenager), and that’s a great word for it, is composure,” Stars goalie coach Jeff Reese said. “As far the composure and the presence in the net, it’s a calming influence on a hockey club and he has that.”

That calming mental approach is why Oettinger was considered the top goalie prospect headed into draft. He had already played a full season of college hockey with Boston University and was never rattled. In 35 starts with the Terriers he posted a 2.11 goals against average and .927 save percentage.

“It was kind of always my plan to come in there and win the starting job and then be the guy,” Oettinger said. “I wouldn’t say I was surprised, but it was well earned and appreciated being able to play that many games.”

Mental fortitude is a key part of goaltending, but Oettinger also has the raw tools the Stars haven’t had in a goalie prospect in a long time.

He’s big at 6-foot-4, and he uses that to his advantage. There aren’t any wasted motions in his movement and he’s seemingly always square to the shooter with his big shoulders. It looks effortless and is reminiscent of the San Jose Sharks’ Martin Jones and the Montreal Canadiens’ Carey Price.

“For me it’s not having to be super quick and super athletic like smaller guys,” Oettinger said. “Just being really good technically and positionally, just kind of being able to use my size to my advantage.

“Being the size I am you take up a lot of net without even knowing it,” he added. “So just learning that and working from there.”

While it may look effortless, it comes with a lot of hard work. Oettinger may be his toughest critic, he spends a lot of time dissecting video, and he’s well aware that his smooth movements in net start with his feet.

“This summer you want to get a lot quicker and become a better skater and really focus on that, the basics of my skating,” he said. “Then after that then I kind of want to move into puck handling after that.”

The 2017-18 season could be a busy one for Oettinger, who is attending USA Hockey’s World Junior Evaluation camp later this month. He’s expected to be the go-to goalie once again at Boston University, while there is a strong possibility he could be starter for Team USA at the 2018 World Junior Championships in Buffalo.

“Never take for granted a chance to potentially make a team and potentially represent your country,” Oettinger said. “It’s always cool when you get to try and play for the US.”

That’s about as far as Oettinger will look ahead. It makes sense to think Oettinger could be the future in Dallas. When Ben Bishop’s new six-year contract expires Oettinger will only be 24, which seems like perfect timing for a new franchise goalie to take over.

Media members, coaches, and fans think about that. Oettinger doesn’t.

“That could be a possibility,” Oettinger said. “But it will be based on how hard I work.” 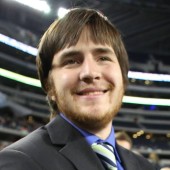