Sergei Bobrovsky made his first trip to Philadelphia in July not knowing a word of English. Less than three months later, the 22-year-old Russian has a chance to start the season with the Flyers.

With news this week that No.1 Michael Leighton will be out at least a month with a bulging disk in his back, Bobrovsky finds himself in a battle with relatively unknown Swede Johan Backlund to back up Brian Boucher on opening night. And while Backlund is coming off hip surgery that has so far kept him out of preseason action, Bobrovsky is taking full advantage of his absence.

After backstopping the Flyers to a 3-1 win over the Islanders with 32 saves on Wednesday, the goalie that Flyers fans have quickly adopted as “Bob” improved to 3-0-1 in the preseason with a 1.37 goals-against average and an incredible .952 save percentage.

Given Philadelphia’s long, strange history between the pipes, none of this should come as much of a surprise. Neither then should Bobrovsky’s unique path to potential NHL puck-stopper.

Bobrovsky is not your typical goaltending prospect coming out of American university or Canadian major junior leagues. For the past two seasons he has been playing in Russian’s Kontinental Hockey League for Metallurg Novokuznetsk, putting up very respectable numbers behind one of the worst teams in the KHL. Last season he posted a 2.72 goals-against average and a .919 save percentage in 32 games, prompting the Flyers to sign him to an entry-level three-year contract back in April.

Just two months later, the 6-foot-2, 190-pound Russian was on the ice at their practice facility in South Jersey for his first Flyers rookie camp and quickly showed why there was so much hype surrounding him when he signed with the club. He demonstrated great quickness in the net and was almost unbeatable down low. After only a week of practices, Bobrovsky returned to Russia for the remainder of the summer, but he left the Flyers front office, media and fans talking about him.

“His quickness is what catches everybody’s eye,” coach Peter Laviolette told NHL.com. “I think that’s what jumps out most for everybody that watches him, is that he’s athletic and he’s quick.”

When training camp started up in early September, some members of the Philadelphia media suggested Bobrovsky could make the Flyers this season as Leighton’s backup. That seemed like a stretch – until the quick-footed Russian got his shot to play in the preseason.

In his first game last week against the Devils, Bobrovsky relieved Leighton in the third period down 3-2. He did not have much work in the third but did make two nice saves, including a glove stop on a Jason Arnott breakaway, as the Flyers tied it and it eventually went to a shootout. Bobrovsky stopped all but one in the shootout to lead the Flyers to their first victory of the preseason.

Fans in Philadelphia were buzzing after the game about how good Bobrovsky looked.

While the Flyers hope Backlund could see time this weekend – barring any setbacks – Bobrovsky is making it tough for them not to keep him around to at least start the season. Some suggest he needs seasoning in the AHL to get used to the North American rink size and game play, which includes more traffic, net crashing and shots from anywhere. (As Martin Gerber told InGoalMag last week, it’s a big change from the pass-first, wait-for-a-perfect shot tactics of the KHL).

So far in the preseason, however, he has not seemed out of place. Flyers goalie coach Jeff Reese has said there are things in Bobrovsky’s game that still need to be refined, but he’s also been quoted as saying the young workhorse is ready for the NHL now.

Either way, it seems clear Bobrovsky is destined for the NHL sometime soon. The Flyers are just hoping he plays more like Bernie Parent, Pelle Lindbergh and Ron Hextall when he does arrive for good, and not like past highly touted prospects like Maxime Ouellet and Jean-Marc Pelletier.

… Look for a more in-depth analysis of Bobrovsky’s style at InGoalMag soon.

John Casey is a recent graduate of the broadcast journalism program at Temple University, with a day job at a Philadelphia talk radio station and a long history with the great frozen game. In addition to 13 years between the pipes himself, he spent three years working as an AHL off-ice official at Phantoms games, giving him the best seat in the house to watch goalies like Jimmy Howard, Jonathan Bernier and, of course, Michael Leighton, as they played their way into the NHL. 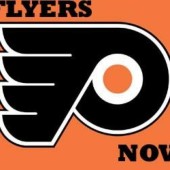